Science Behind the SOLD 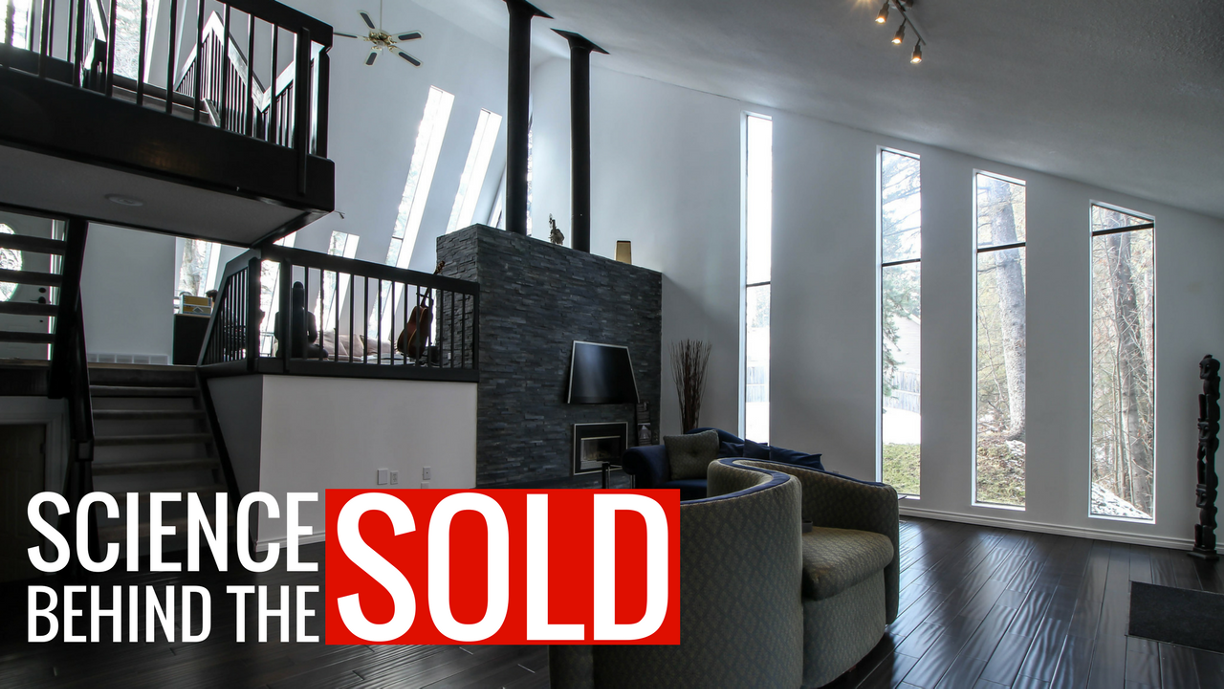 With the world of real estate changing daily, You need an agent that's going to be on the cutting edge of marketing and technology to make sure Your home gains the most exposure possible.
Not only that, but to make sure that it gets in front of the right people who are qualified, and are looking for a home just like Yours to buy.
Here is the step-by-step online marketing action plan that I set into action to gain the most exposure possible for this home...which then resulted in 17 showings in the first 7 days of it being on the market, which then led to multiple offers within 11 days.
Now does this happen each and every time for each and every home that I list and market?
...absolutely not.
I wish that was the case and that's my goal, but not everything always happens to fall into place like this one.
But You can rest assured that Your home would be marketed in this same fashion to gain THE MOST exposure possible.
One of the reasons why this one is special to me is for the fact that this home had been on and off the market for awhile with another REALTOR® and resulted in little activity and no offers. I knew that this home was special, and with my Big Brand Online Marketing Plan, a different twist on the marketing and by showcasing this home to its full potential we could really get the traction we needed to receive an offer.
Now its without being said that this home showed very, very well and had a one of a kind layout which made this home so much more desirable and is one of the reasons why it received the attention it did once we put our plan into action.
The first step was to capture and create THE BEST content we could of the home to showcase its strengths and uniqueness. In this process we captured the home with high resolution HDR photo's, created engaging video walkthroughs that evoke emotion and a video that people will actually want to watch. I also hired a professional virtual walkthrough tour company so that potential buyers could walk virtually walk through the home at their own pace and check our each room in detail at their leisure. They also completed the professional floor plan/layout with all the room measurements so people could really experience the size of the home.
Once we created all the high quality content it was time to systematically release it to everyone to receive the most attention possible.
The first post I created was a teaser called the "SNEEK PEEK" which I released on my Instagram, Instagram stories and also on Facebook. This was a post simply letting people know that this listing was to come on the market the next day, and I included a couple enticing pictures that I thought people would find interesting.
Here is what the Facebook post looked like and the attention it received. 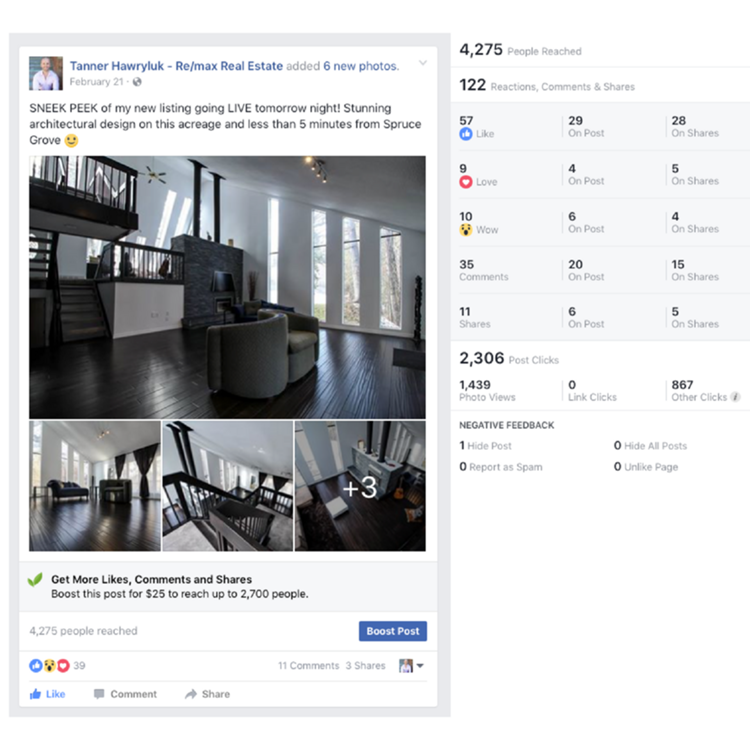 This post was seen by over 4,000 people, had 57 likes, 11 shares, over 1,400 photo views, over 2,300 post clicks and 35 comments.
My clients were also very helpful by being active on social media and sharing these posts with their friends which helped a ton.
...all in all, not bad for a "SNEEK PEEK" and an organic post.
Once the listing was live the next day I then transferred some of the HDR pictures to my online marketing team and they started creating the initial targeted ads, then the series of re-marketing ads, Google ads, Instagram ads and banner ads that were to been seen all over the internet across 1,000's of websites in the following days.
Here is what the initial Facebook ad looked like and the magnitude of exposure it received. 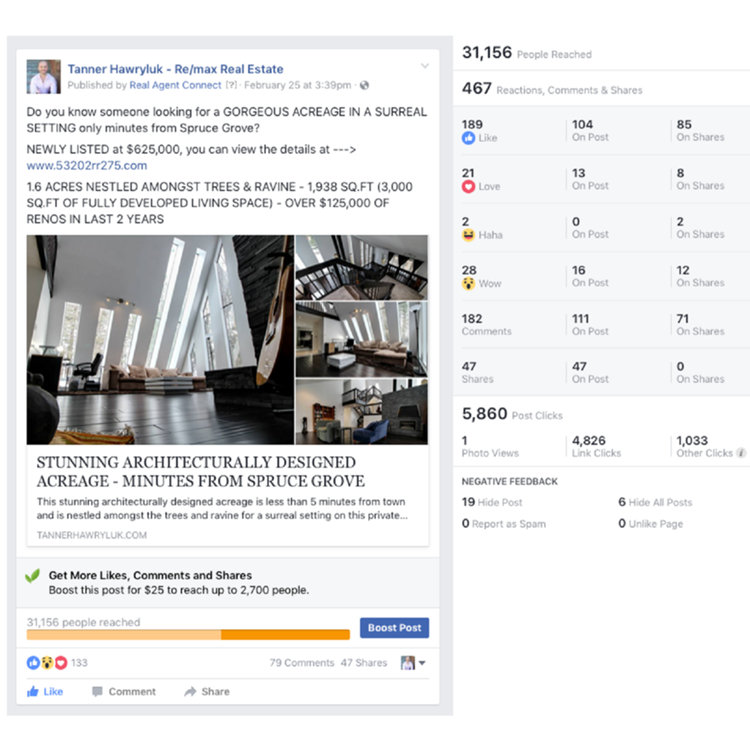 This is where the magic happens and what sets apart REALTORS® who simply "post to Facebook" and the ones that invest in the marketing with a dedicated team to gain the most exposure possible for Your home.
This ad alone reached over 31,000 targeted people, received 189 likes, 182 comments with people tagging their friends in this post, had 47 shares and the big number is that over 5,800 people clicked on this post that were taken to my website to view this homes details.
...that means that there was now over 5,800 people that we were now being re-targeted to and being followed around the internet with this home in the forefront keeping it top of mind.
Now that's POWERFUL!!!
After the initial ad was released we waited a couple days before releasing our next piece of content so that people wouldn't become ad blind to the home and so that they would still find it intriguing and want to tell their friends about it.
For the next piece of content I hired a professional videographer to capture and create a moving video of the home that people would want to share and watch right to the end.
Here is the video that he created for this home.
This video was another organic post, so that means that I didn't spend any ad dollars on this particular post as I knew this would take off on its own. I also wanted to keep the majority of the ad budget on the original ad bringing people to my website so that we could track them and then re-target them all over the internet.
Here are the results of the organic video post. 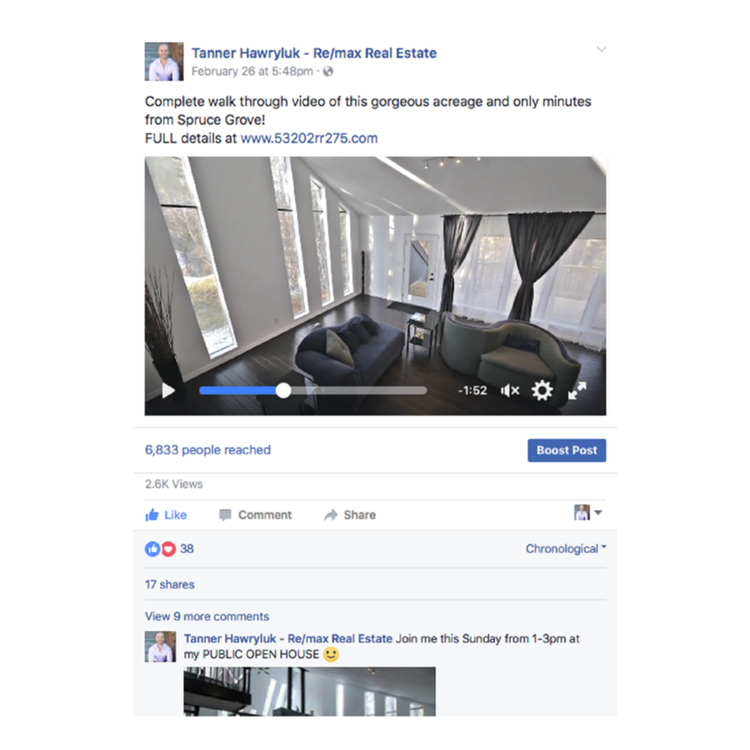 This post reached almost 7,000 people, had 38 likes and over 17 shares within the first week of it being on my fan page.
Another reason why I like to create videos of the home's I list is that it evokes another emotion when people are watching it. Especially if there's cinematic music and makes people feel happy or entertains them.
Right after this was released we decided to ride the momentum and host a public open house while this was a the top of people mind.
10 days after this home went live on the market I hosted a public open house. The only advertising I did for it was some road signage, posted it to my real estate fan page and also our Re/max Real Estates Facebook page for all to see. I made sure that I posted it in every ad that we had currently running so that people that were interested from those separate ads all knew about the event. 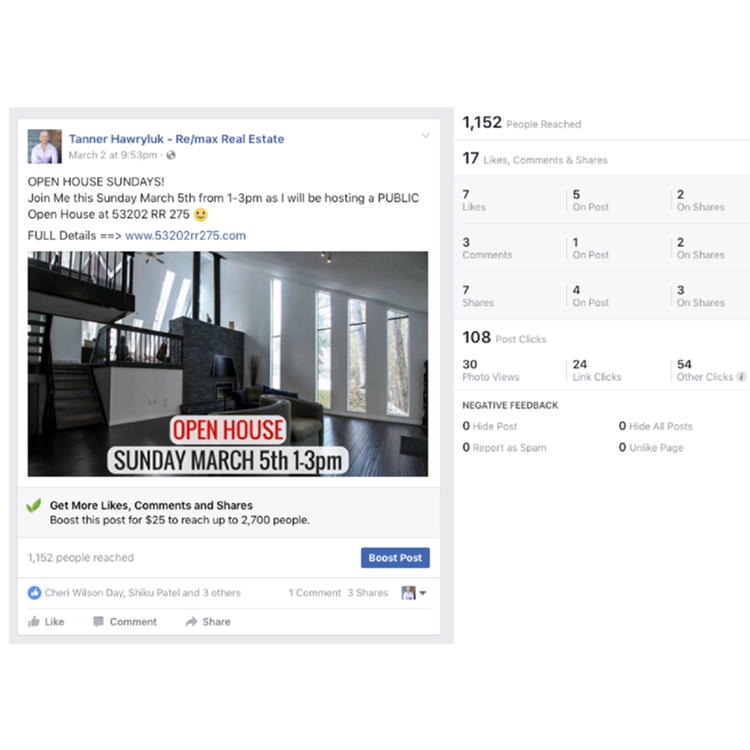 ﻿Here are the results from the Open House post that I made a couple days before I held the open house.
It reached over 1,100 people, had 7 shares, received over 100 post clicks and 24 people clicked to view more details on this home.
Generally speaking, public open houses are hit and miss. Meaning that sometimes You'll get a couple people, and sometimes You'll get no one. If you do get people You'll maybe get a 2 couples that pop in and see what You have to offer.
Generally You don't really have the most serious or targeted people coming to Your open house.
So in all honesty, I maybe expected 1-3 couples that I had chatted with before to come pop by the open house but wasn't really expecting to see a lot of people. Number one being that it was an acreage and knowing that even open houses in town are hit and miss let alone an acreage.
...but what happened next totally blew me away.
Not only did those 3 couples pop by, but 4 MORE couples popped by to come and see the home. So I had 7 couples total come by to the acreage open house.
UNBELIEVABLE!!!
What was neat about the open house is that there were people in the home for the entire time I hosted the open house. It was nice to see couples wandering through the home all interacting with one another and admiring the architecture and uniqueness of the home. All in all it was a TOTAL SUCCESS!
After the Open House on Sunday we received our FIRST offer.
On Monday we received our SECOND offer.
Then on Monday night we received our THIRD offer.
We went into multiple offers within the first 11 days of being on the market and after the buyers conditions were fulfilled we were officially SOLD :) 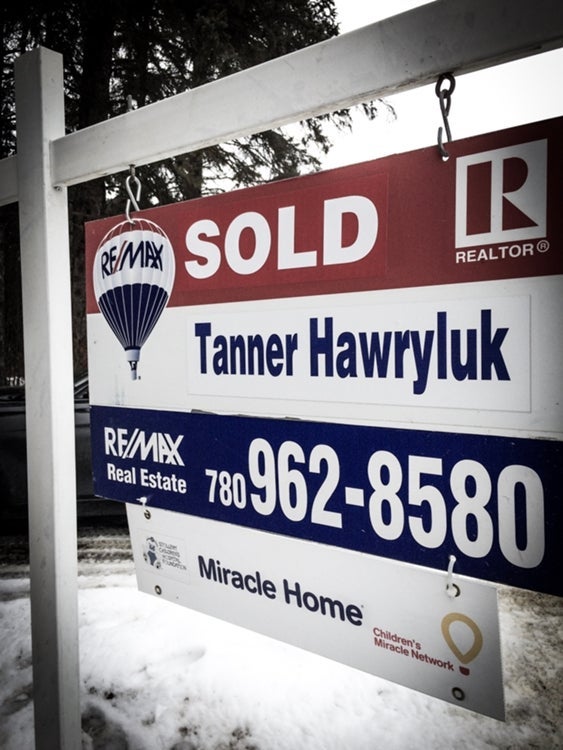